Are you looking to hire a vehicle in London? Then you need to know about the new Safer Lorry Scheme, which was introduced on September 1st 2015. It’s a scheme that aims to reduce fatalities on the city’s roads by improving the mirrors and side guards on HGVs. Here we provide an overview of the Safer Lorry Scheme and the penalties for non-compliance.

What are the rules of the Safer Lorry Scheme?

The scheme stipulates that all lorries must have “basic safety equipment” when being driven in London. If a lorry was previously exempt from national legislation, it will need to be modified as part of the new scheme. This includes construction lorries that are involved in a high number of fatal cyclist and pedestrian collisions in the capital.

What does the basic safety equipment include?

All vehicles over 3.5 tonnes must have Class V and Class VI mirrors to give drivers a clearer view of cyclists and pedestrians around their lorry. They must also fit side guards to stop cyclists from being dragged under the wheels during a collision. The image below (courtesy of TFL) shows where mirrors must be fitted. 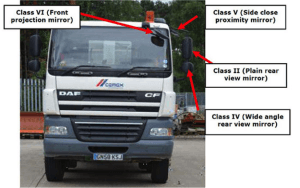 Why has the scheme been put in place and who is behind it?

The scheme has been launched by the Mayor and TFL in collaboration with London Councils and Heathrow Airport, following reports that HGVs were involved in 9 out of 14 accidents that led to cyclist deaths in 2013. The scheme has been put in place to reduce death and injury on London’s roads by 40% by 2020.

What do I need to do if I’m hiring a lorry in London?

If you are hiring a HGV over 3.5 tonnes then make sure your hire company has met these new guidelines, as the scheme is being enforced 24/7 across London and there are penalties for non-compliance. We will ensure that all vehicles hired for jobs in the eligible area will meet these new guidelines, so there is nothing to worry about if you hire with us.

What are the penalties and how are they enforced?

If drivers are found without the basic safety equipment on their lorries, they may be issued a £50 Fixed Penalty Notice and potentially a £1000 fine at a Magistrate’s court. The Safer Lorry Scheme is being enforced by the Metropolitan Police Service, City of London Police and the Driver and Vehicle Standards Agency. Licenses may also be suspended and the Traffic Commissioner will be notified of any companies whose lorries are not meeting the requirements of the scheme.

Which areas of London does the scheme include?

It includes the same area as the low emission zone across London. The scheme will be enforced 24 hours a day, 7 days a week.

How we can help

If you need to hire a lorry in the London area then give the Highway Hire team a call on 0845 600 2028. All of our vehicles will meet the new standards set out by the Safer Lorry Scheme if you are hiring for a job in the London area. They can be rented on a short or long term basis, with flexible hire terms to suit your business needs.